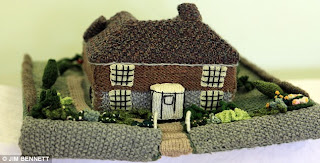 With thanks to my pal Rhyannon, who sent this link.

From The Daily Mail, a newspaper in the U.K.
(full article with all photos at link above.)

At first sight, this looks like a classic British village.

There's a beautiful Norman church, two pubs, a shop, a school, a village hall, a huge Georgian manor house with landscaped gardens, teenagers slouched around the bus shelter and dozens of red-brick cottages with gardens in full bloom and vegetable patches bursting with cabbages, cauliflowers and sweet peas. There's even a cricket pitch, with a match in full flow and the offside stump leaning drunkenly to one side after a particularly unplayable spinner.

But on closer inspection, things don't look quite right. The fielders are a bit wobbly in the leg department and far too fat to fit in the very smart pavilion for lashings of tea and egg sandwiches. And the roof on the manor house is rather saggy.

The Mitchell house, complete with stone wall and arched doors And the chimneys are wonky. And most of the television aerials look like they've been caught in a nasty storm. And the smoking teenagers are a bit misshapen.

In fact, the whole thing looks rather, well . . . home-made. Which is no surprise, because every inch of this village - Mersham, in Kent - has been lovingly knitted by a small group of very twinkly ladies who started 23 years ago with a couple of cottages and some pigs, and ended up creating more than 60 properties, complete with wheelie bins, outdoor loos, gas tanks, cars in the driveways and even a smart red telephone box. And on Saturday, the entire village - lock, stock and beautifully knitted barrel - will be up for sale in the (real, not woollen) Mersham village hall. It has caused quite a stir, and not just in Mersham. The ladies and their woollen houses have been on the news, in the papers and interviewed by TV companies from all over.

'It's all been rather extraordinary - we've been a bit taken aback,' says Joyce McDonagh, who is clearly enjoying all the fuss and is hosting our meeting in the village hall.

Has someone moved the pillar box from outside the village store?

It all started in 1986 with an article in Woman's Weekly and a small group of ladies from the Mersham Afternoon Club ('We're linked with Age Concern, but we don't like to think about that because it makes us feel old,' says Joyce, who is 82 and a retired market researcher) who had a bit of time and a few balls of wool on their hands.

'We read about another village that'd done it, and we thought we'd give it a whirl. But we'd no idea what we'd bitten off, it just sort of grew and grew and grew.'

The Edensor bungalow has had a couple of skylights fitted

Indeed, between them, the ladies have spent thousands of hours knocking up everything from pecking chickens to chimney stacks, impenetrable Leylandii hedges to gravestones.

'The lady who did the church knitted most of the graves when she was on a sunbathing holiday in Spain, which gave the other guests a bit of a jolt,' says Margaret Goldup, 80, the club's treasurer. The Old Gate House, complete with a plume of smoke from the chimney

There's more to knitting a village than you might think. While they might look a bit woolly around the edges, all the buildings are knitted to scale, courtesy of a lot of painstaking work by the late Ron Stead, husband of one of the founders, Sheila.

Ron traipsed round the lanes with his camera and, after weeks of cutting and sticking and measuring, produced immaculate cardboard three-dimensional templates of each building.

The woollen version appears thatched rather than tiled, but otherwise the Royal Oak pub is easily recognisable 'We just sort of knitted round them - after we'd spent a lot of time peering at people's homes, front and back, to get the colours right and the gardens spot on,' says Margaret.

When it was finished, the village was put to work - displayed at fetes and craft fairs, where it raised more than £10,000 for the village hall fund. Sadly, the numbers of original knitters in the Afternoon Club have dwindled. 'There were about 12 of us to start, but most of them have popped off now,' says Joyce. And that's part of the problem. Just hauling the village out of the huge wooden drawers in the village hall is a step too far, not to mention keeping on top of the refurbishments (many hours have been spent patching up roofs and chimneys and sprucing up. From woolly chickens to the 'thatched' pub, they're perfect in every detail. Meet the ladies who've spent years knitting their entire Kent village the cabbages) and transporting it to fetes and craft festivals.

And what of the real Mersham, which has a population of 1,022 and sports countless extensions, conservatories, satellite dishes and an awful lot of cars? Has it changed much as a place to live? 'Oooh yes!' they all exclaim. 'We used to know everyone, but it's grown so much. . . And the bakery's gone, and the haberdashery and the slaughterhouse. . . All those big 4x4s - we call them funeral hearses. And it's not nearly as tightly knit.'

'Oh yes, dear. Speaking of knitting, people just don't do it any more,' says Joyce. 'I've a left-handed daughter who doesn't want to know and grandchildren who couldn't be less interested.' 'They don't like knitted stuff,' chips in Daphne O'Donoghue, 75. 'It's too scratchy - they prefer T-shirts and hoodies - they'd rather go to Next. I used to knit such complicated stuff, but now I watch television instead.'

And on Saturday, how will they feel as their extraordinary village is split up, never to be displayed together again? Well bowled... the cricket green wasn't missed out in the knitted village

She has a point. It might all sound a teeny bit daft, but there is something splendid and charming and really very British about their version of Mersham. Even if it is made entirely of wool and the cricket team look rather hopeles
Posted by Diana Troldahl at 1:15 PM

brilliant isn't it? I live fairly near, so I'll be going to the village hall tomorrow to see it all - no doubt I'll be blogging later!

wow - what an amazing lot of work - i bet they had some real fun knitting all of that!

What a stunning display of incredibly detailed fiber art!! You ladies are just amazing! I would so love to see this is person.

I can tell you it was an amazing experience. the ladies were great, really fun, not at all the "old lady club" one might have stereotypically imagined. I was lucky enough to buy one of the cottages! strangely there is more info here on a USA blog than in the UK...

Wow. What a shame they couldn't have been bought together and donated to a museum or something.

Thank you for sharing your find! What a wonderful way to work and play together with their knitting.
I'll bet their families were thrilled, too.

I usually go with my family to a some village specially because we like to know the people and the places. I believe the people are more helpful and kind than people of the city.
I love to go with my couple, he usually buy viagra and we enjoy too much our privacy.

Impotence, or penile erectile dysfunction, in men is not as rare as one would think it is.
In fact, one out of ten men around the world is affected by this condition. It is not exclusive to old men either. Impotence is caused not just by physical factors,
but mental factors as well.
Exercising on a regular basis and eating healthy food will increase your ability to sustain prolonged physical effort and we all know that sex is effort.
Smoking, frequently drinking large quantities of alcohol, taking recreational drugs and lack of exercising will sap your stamina and also slow down the flow of blood.
Penis exercises can be used for maintaining fitness, preventing or controlling premature ejaculation and increasing the length and girth of the penis.
by penis enlargement pills you can overcome these problems and not only that you can also enlarge, extend also to strengthen your penis and premature ejaculation will not exist anymore for you.
visit http://www.factspenisenlargement.com for more info.

I love the village where there aren´t a lot delincuence, I prefer the quiet place and with too much vegetation. That is why i was interested in this blog, is really interesting and helpful. Actually i was looking houses because i am really interested, and i found costa rica homes for sale i think is wonderful.

I am impressed by the quality of information on this website. There are a lot of good resources here. I am sure I will visit this place again soon.

I admire what you have done here. I love the part where you say you are doing this to give back but I would assume by all the comments that is working for you as well. Do you have any more info on this? 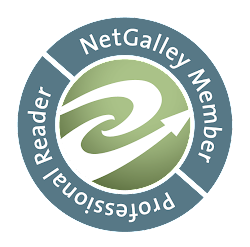